When we were encroaching 1 million views of our DWP, I was tasked with creating an engagement campaign inclusive of prizes. I searched high and low for ideas of what people had done/were doing and came up empty-handed for the most part.  Between my Igloo, LinkedIn, Internet, and other Social Media searches, I wasn't having very good luck. I saw one article regarding DWP Launches within Igloo Communities here, that talked about Bingo, which sparked an idea. So, I made our own version of BINGO, essentially. Our DWP is named RedZone, so I created ZONE as the game (needed to kind of dumb it down a bit, so it wasn't too overwhelming or difficult. The point was to get engagement.) I also needed to include aspects of all our business, ranging from field, office, and shop employees. I attached the digital game board for you to see, and the promo graphic I created. Grand prize was a Chrome Book, second AirPods, and third a portable Bluetooth speaker. Then 4-15th place received a free t-shirt that our safety department had on hand. The players just had to send me the images via email or the DWP messaging, and then I conducted a random drawing for the winners.  A lot of people had fun with it, and some even completed the entire board! It was a fun little brain break. (They had two weeks to participate.)

Nicely done Ashley. Congrats to you and J.F. Ahern team.

Ashley Thomma this is AMAZING!!!! what a neat concept and thanks for sharing the images. I love BINGO!!! Do you mind if I share this internally with Team Igloo as well? This is really cool!!!!

Brian McIlravey, thank you! I don't mind at all, go ahead! I hope it helps others in the future with ideas too. :)

What a great idea, Ashley Thomma ! Can you tell me how you displayed the Bingo Card on your DWP? Did you just use an html widget to display it? And did you add in a microblog or anything so participants could ask q's?

Obviously, I'm thinking of stealing this idea, so I need intel! ;-)

Jocelyn Flint Haha! All good, happy to help, and share! It was a blog article, and I just included the board as an image within the article (see screengrab below). People either commented within the post their questions or IM'd me directly via Skype. 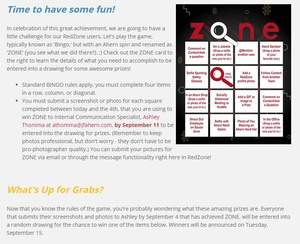 Ashley Thomma Thanks! This is great. Did you just keep track of everyone's progress in an Excel sheet or something? Wondering about how best to manage from the back end...

Jocelyn Flint Yes! I had them email me the photos, and then I verified they achieved ZONE, and then entered their name into a spreadsheet. Then, when I was ready to complete the random drawing, I had all their names in the spreadsheet all ready to go!

Ashley Thomma - this is beyond impressive & amazing!!!

I have so many questions! What did your leadership think of this engagement activity as a whole? Did the company see any surprising trends come from it?

Can we sign you on as our official board game designer?!

Tom Ryan haha! Well, the Executive Vice President of Human Resources and Legal is the one who approved it. ;) Other business leaders within the company also participated! I listed out the top 5 users over the past year, who also earned a t-shirt. I also listed out some factoids and included a graphic. 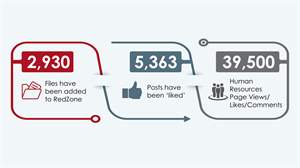 Haha! I was a graphic designer here for 14 years before taking on this role, so we're all lucky I can create fun images without having to use additional resources.

I read that as, yes you want stock options, a parking space, and you'll get to work on a digital workplace-opoly soon!

Ashley - This is totally awesome! I LOVE the bingo card!  - Thanks so much for sharing this with the Igloo community.

We would love to take this idea and formalize it into an Engagement campaign for our Playbook.  That way other  Digital Workplace managers can recreate this activity and fun for their users  - Are you Ok with this?

Andrea Gumz-Dietrich oh, wow! What an honor! To think, I almost didn't share the idea! Haha! I am ok with that, go right ahead.   Let me know if you need anything from me.

Ashley Thomma Awesome sauce!  - I will reach out and review it with you when the draft is done I would love you to review it before it goes live.

Keep up the great work!

Andrea Gumz-Dietrich Perfect! I was going to ask if that would be ok.   Thanks again! You made my day with this!

Thank you so much for sharing this with the Igloo Community - I knew it would be a HUGE hit :)

Veronica Hayes that you did! Thanks for telling me to share!!

Ashley Thomma separately passing the congrats on hitting the 1 million views! that's quite the Milestone!!!